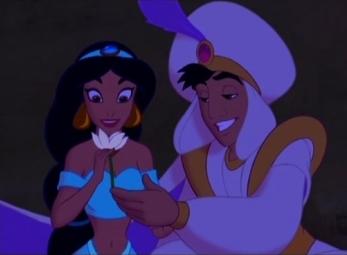 When did you last let your heart decide?

Variant of the Good Times Montage. Two characters are becoming romantically entwined. Their first date is shown normally and the audience is shown how amazingly compatible the couple is.

A montage follows, usually with no dialogue and an upbeat or romantic soundtrack, showing the couple during a series of classic dates (the picnic, the carnival, the unexpected kiss, the meaningful eye contact, The Meadow Run, etc).

The montage segues into the end of a date and the audience is shown just how in love the couple has become.

In TV shows, this is often a Time Compression Montage serving to show how, in this episode, the Girl of the Week isn't just a casual fling.

See Literally Falling in Love for a Sub-Trope. Contrast with Lost Love Montage.

Examples of "Falling in Love" Montage include: