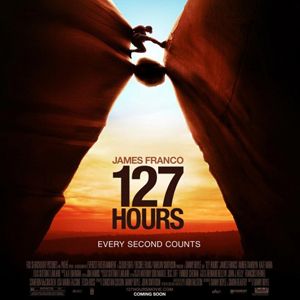 "Don't pass out."
—Aron Ralston, to himself (and the audience)

While hiking in Blue John Canyon in Utah, Aron made a misstep when he grabbed on to a loose boulder while climbing down a narrow canyon. The boulder dislodged, and Aron and the boulder fell to the bottom, where the boulder crushed his right forearm against the canyon wall. The film dramatizes Ralston's experience of being trapped by the boulder for 127 hours, and the unthinkable choice he must make in order to survive.

Tropes used in 127 Hours include:

"No Number Twos yet... which will disappoint my insect friends."