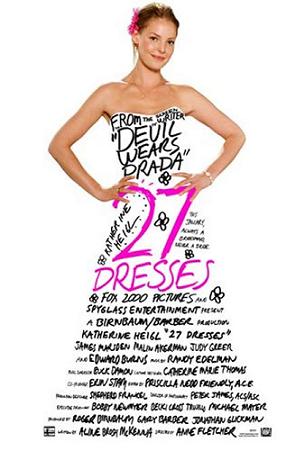 27 Dresses is a Romantic Comedy, released in 2008, starring Katherine Heigl and James Marsden.

The story follows Jane Nichols (Heigl), a young woman in love with her boss George, but she does not have the courage to tell him. A notorious doormat, she has been a bridesmaid in 27 weddings, usually shouldering much of the responsibility for planning the weddings as well. We're introduced to Jane the same night she meets Kevin Doyle (Marsden), a cynical young man who covers weddings for the local paper (though Jane is unaware of this). He is intrigued by the fact that she seems to be in two different weddings on the same night. Through a bizarre set of circumstances, they share a taxi ride home. Jane accidentally leaves her planner/calendar behind. Kevin finds it and realizes her bridesmaid duties are a regular phenomenon.

Soon after, Jane's spoiled and vain younger sister Tess (played by Malin Akerman), comes home to visit. She meets and falls in love with George, despite the fact that they are complete opposites. Tess continually lies to George to convince him that they are soulmates, much to Jane's dismay. Meanwhile, Kevin has been using Jane's calendar to find her and continually hound her for a date. Unfortunately, he has an ulterior motive. He is planning to write a story on the "perpetual bridesmaid", a piece that he believes will further his career.

After a very short courtship, George proposes to Tess, who of course assumes that Jane will plan everything for their wedding to be held in several weeks. Jane's emotional state deteriorates rapidly, while Tess' diva behavior increases dramatically. On top of that, Jane learns Kevin is actually a wedding journalist who plans to cover George and Tess' wedding (though still unaware of the perpetual bridesmaid article he plans to write). Kevin eventually deduces that Jane is in love with George, and pushes her to stand up for herself and what she wants. At the same time he asks his editor to hold the article about Jane. He is beginning to realize that there's more to her than he first thought, and the article doesn't portray her in a flattering light. His editor says she'll hold the story, but unbeknownst to Kevin, goes back on her word and publishes it anyway.

While running an errand, Jane and Kevin get stuck overnight due to weather, and realize they have feelings for each other, which they act on. But the following morning, Jane sees the article. She's understandably humiliated, and leaves him. Tess is furious with her for allowing herself to be manipulated, which furthers her depression. But when Jane finds out that Tess has cut up their mother's wedding dress (which she had planned to wear to her own wedding), she comes to her senses and realizes that George needs to know the truth. At the rehearsal dinner that night, Jane gives Tess one more chance to come clean. She refuses, so Jane proceeds to humiliate Tess during her speech with a slideshow that vividly demonstrates the lies Tess has fed George. The wedding is called off.

Eventually the girls' father forces them to see each other and work out their differences. Tess learns that she needs to be less selfish and more compassionate before she deserves a guy like George. Jane realizes that Kevin was right, and she needs to learn to take care of others without completely ignoring herself. Later that evening George invites Jane to a charity event, as he needs a date. She meets him at the office, where she finally confesses her feelings for him. He kisses her, but they both realize they have zero chemistry, which sets up the finale. Jane realizes Kevin is actually the right guy for her, and she ends up with him instead.

The movie was considered so-so by critics (41% at Rotten Tomatoes), but well-received by its target audience. It was considered a financial success, grossing over $160 million worldwide, while only costing $30 million to make. The low production budget can be attributed to the strong, but not terribly well-known cast.

Tropes used in 27 Dresses include:
Retrieved from "https://allthetropes.org/w/index.php?title=27_Dresses&oldid=1711004"
Categories: