Difference between revisions of "Category:Science Fiction"

"It's been said that science fiction and fantasy are two different things: science fiction the improbable made possible; fantasy, the impossible made probable..."
—Rod Serling, The Twilight Zone 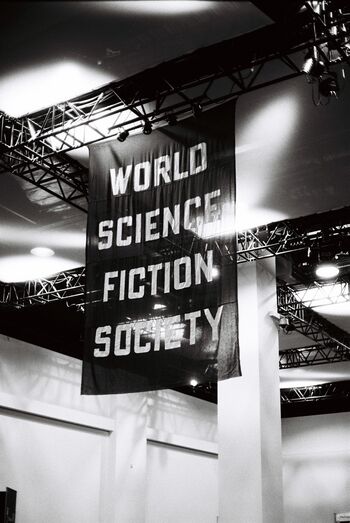 As a literary genre, Science Fiction (A subset of Speculative Fiction) is broad and incorporates subgenres ranging from Steampunk to Cyberpunk, running headalong through Space Opera on the way.

The one defining(-ish, definitions differ) trait of Science Fiction is that there is technology that doesn't exist in the time period the story is written in. Consider 20,000 Leagues Under the Sea. The story was written in a time when submarines were still at the prototype stage, so 20,000 Leagues Under the Sea falls within the boundaries of Science Fiction.

However, Science Fiction is as much a genre as a setting. Often, the technology is a means to explore a concept, and the story could be a detective story focusing on how advanced technology affects crime and policing. This story would be both Science Fiction and Detective Story.

In general, without getting too much into the advanced and diverse subgenres of Science Fiction, there are two schools -- "hard" and "soft". "Soft" science-fiction usually uses technology as a means to an end, merely a backdrop that allows The Captain to fight for Justice™ with a Stun Ray against the evil aliens and have space sex with the Green-Skinned Space Babe. Due to the desire to tell a story for the masses, Soft Science Fiction tends to be rather loose on the scientific integrity. On the other hand, "hard" science-fiction usually tries to use the advanced technology as something that is important in itself, with its consequences, limitations and new uses being the main plot points. Isaac Asimov's Robot stories, per example, are about how robots affect and are affected by society, and how the Three Laws of Robotics have effects upon them. Here, the technology tells a story in itself, and because the explanation of technology rarely has anything to do with violence or sex, hard science fiction is usually a niche market, especially because readers are expected to understand how the technology involved works, which often is a realistic manner based on then-current research and understanding of technology. (The Moon Is a Harsh Mistress doesn't have then-unheard of calculators, so everyone runs around with slide rules, which was common in The Fifties). Another unfortunate tendency is for hard sci-fi writers to scoff at well-developed characters and stories as "soft"; quite often the plot is sacrificed For Science! This divide has been around since, essentially, the very beginning of the genre.

As with everything, there is often a blend of Hard and Soft Science Fiction. It is perfectly possible to write a hard Science Fiction story about The Captain running around shooting people with miniaturized microwave emitters designed to incapacitate people without killing them, shooting aliens and having sex with Green Skinned Space Babes, (with no chance of conception because green aliens are biologically incompatible with humans) just as one can write about the effects of absolutely ludicrous and unexplained technology that is much like magic.

This can often lead to Hidden Depths, as a story might be "cyborg police bust crime in the grimdark future by hacking people's brains", which sounds like soft Science Fiction, but further exploration shows next to everything to be based on technology that is currently available, and the consequences of such technology is explored in depth.

Science Fiction authors and fans are notoriously cranky about how their work is not taken seriously by the literary community, and especially resent being lumped in with the fantasy genre. (Speculative Fiction, an umbrella term for all varieties of imaginative literature, has an an analysis page that explains the differences between Fantasy and Science Fiction.) Note also that many Science Fiction fans dislike the term Sci-Fi: to them it suggests the flanderized conception of the genre in popular culture, with green-skinned aliens, giant space battles and hammy production values. Therefore, they will insist on calling it SF for short.

Subgenres of SF include:

(Exact definitions of these genres, including whether they're really SF, and how much they overlap with fantasy, will vary from person to person.)

This category has the following 12 subcategories, out of 12 total.