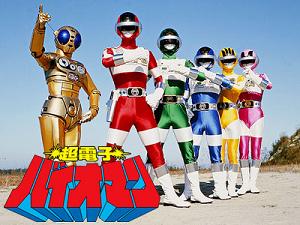 The Bioman team and their friend Peebo.

Chōdenshi Bioman (Super Electronic Bioman) is the eighth Super Sentai and aired from 1984 to 1985.

500 years ago the Bio Robo traveled to Earth from the Bio Star and showered five people it discovered with Bio Particles. In the present day, Doctor Man tries to take over Earth with his mechanized followers, Neo Empire Gear. Now the robot Peebo must gather the people whose ancestors were infused with the Bio Particles to become Bioman and save the world.

The main units of Gear are:

Tropes used in Choudenshi Bioman include: