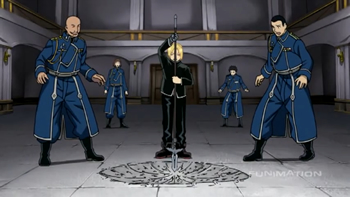 You can't make a metal weapon without a little metal floor.

Power is consistent. Power is functional. Power is not free.

For magic to be performed, for something to come into existence, for a wish to be granted, or for a loved one to be healed or returned to life, another thing of equal value must be given up. It has a simple dramatic purpose: It avoids the dangers of giving heroes Story Breaker Powers while adding conflict and sacrifice to an already hard moral choice.

Are the gifts, loves, and life you possess truly worth losing for what you desire? Beware Desire, s/he is a fickle thing.

The object or goal to be traded with Equivalent Exchange must be of equal value to a petitioner. However, how this "equivalency" is determined can be vague. Is the value preset? How valuable it is to the giver? The value to the receiver? Is it purely emotional, or will monetary, legendary, or rare things do? The same penny, handed down from father to son, would be worthless to someone else who just found it on the ground. If a wizard, say, ritually sacrifices a cat to get some magical mojo, which is used: the value of the cat's life to the wizard, or the value of the cat's life to the cat? What measure for value is changed to the whim of the plot.

Much like King Midas's gift of the Golden Touch was a great boon, it ultimately robbed him of his greatest treasure, his daughter. Wishers may not truly understand the full effects of what they desire, and the gift itself can become its own cost. This is Truth in Television, given the First Law of Thermodynamics. Building in the cost to the boon usually results in a Fantastic Fragility.

Examples of Equivalent Exchange include: