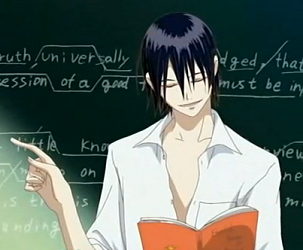 I'm sorry, this isn't the set for America's Next Top Model?

Male versions of this character tend towards wearing Stoic Spectacles, whereas female versions usually have a Hot Librarian appeal. While not exactly a teacher, the School Nurse also technically qualifies for this trope, being school staff and usually sharing a similar dynamic with the principal cast. School nurses, of course, tend to go for the Hot Scientist or Hospital Hottie look.

It should be noted that a Hot Teacher is not necessarily Hot for Student, though if the show does feature a student-teacher relationship, the elder party is very likely to be this trope. Similarly, many Hot Teachers find that quite a few of their opposite-sex students (or same, we're not picky) -- sometimes even the entire student base — are indeed hot for them. How this affects the students' ability to pay attention to the lessons is a good question, too.

Examples of Hot Teacher include:

The boys were learning. As she talked they didn't watch her figure. They watched her fingers.

cast page: The Dark Angel that teaches History of Vampires. Usually his class is too busy drooling over his gorgeousness to learn anything.