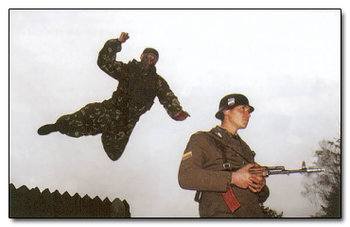 "A true friend stabs you in the front."
—Oscar Wilde

Only a Dirty Coward would shoot someone in the back. Or even knife him.

Back-to-Back Badasses is to prevent this—provided the other character is trustworthy.

On the other hand, if they can't let you escape, and you are the Dirty Coward fleeing a fight, it may happen anyway. Particularly when up against a Combat Pragmatist.

When The Dog Bites Back, this often comes into play.

Does not necessarily apply to executions. Or when The Big Bad decided to turn his back on The Hero in order to stab a hostage. And if a Heroic Bystander shoots a villain in the back, for some reason it's considered, well, heroic.

Sometimes employed as an unceremonious end to what is otherwise a Badass famous character - a staple of westerns.

Compare Back Stab for a video game special move based on this trope. Can be used as Dynamic Entry, in which case a Surprisingly-Sudden Death usually ensues. Beware Backstab Backfire. Don't compare Right Through His Pants...

Examples of In the Back include:

Sheriff Wade Addams: It's the worst kind of killer that would shoot a man in the back just as soon as look at him.

Hickey: "I don't suppose you're the kind of man who would shoot an unarmed man in the back?"
John Smith: "I've done worse than that."

Billy Ray Smith: You just shot that man in the back!
Van Leek: His back was to me.

Do turn around, please. I want to look at you, for I never like shooting anyone in the back.

If you're going to shoot us, you'll have to do it in the back.

Justicar: If they can hit you back, you're doing something wrong.

Uncle Fester: I'll shoot 'em in the back! Turn around! [signature line]

Clay Sommers: Head-on, from the side, in the back; nobody's gonna make a fair fight out of it. We see you, we shoot.

[Smith tries to shoot one of the aliens in the back. The aliens make the laser pistol disappear]
Alien: You showed treachery and cunning, noble qualities on your native planet no doubt, but indicating defective relays in your reasoning circuits.

Chris Larabee: You don't shoot nobody in the back!

Angie: Aww, what you gonna do? Shoot me in the back? That was always the difference between you and me. See, in your place, I could pull that trigger.

Mal: The next time you stab me in the back, have the guts to do it to my face.

Rimmer: What are you waiting for? Gloop him.
Lister: I can't. He's not armed.
Rimmer: Lister, this isn't a Scout meeting. We're not trying to win the Best-Behaved Troop flag. Gloop him.
Lister: What? In the back?
Rimmer: Of course in the back. It's only a pity he's awake.
Lister: You mean you could happily kill him if he was asleep?
Rimmer: I could happily kill him if he was on the job. Gloop him.

Grunt: Warriors like you and me? Right in the face. *Beat* Kidding, kidding.

Private Chernov: Are we to shoot them in the back?
Sgt. Reznov: The back, the front, the head! Whatever you wish! Just so long as they are dead!

Mobster1: [back turned to the player] Always figured someone would sneak up behind me in the middle of the night and shoot me in the back.