The Merchandise-Driven show, otherwise known as the "half-hour toy commercial", is not merely a television show (or other work) with a line of toys licensed on the side, but a television show created from a line of toys. The program exists largely to sell these products to the audience, and this is most commonly associated with cartoons and Anime targeted at a younger audience—though some shows can start out independent, and later become Merchandise Driven after too much success. 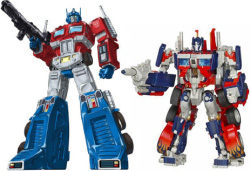 Megatron must be stopped, no matter the cost!

There is a full symbiotic relationship between the show's production and the toy company (or other manufacturer licensed, show-themed products), which is usually the primary (or even only) sponsor of the show. But the key difference between this and normal licensed merchandising is that here, it is the toy manufacturer who dictates the show's Canon. They may be able to demand the addition or removal of characters from the series based on the actual toys in their production line, or that new characters must be something that they can quickly and easily design a toy version for (Military- or paramilitary-themed shows and Humongous Mecha anime are particularly prone to this). Another sign of a toy manufacturer exerting influence is the blatant structuring of episode plots solely around the newest merchandisable toy accessories, often where the characters Gotta Catch Em All or be declared a failure as a human being ... yeah, something like that.

Merchandise Driven shows are not limited to a young audience either. Many anime are adapted from manga or video games only if there's an existing lucrative market, and older anime fans are known for their loyalty and willingness to part with cash. That so many late-night anime can maintain a decent budget is due to this small but vocal group of fans.

Can be halfheartedly avoided with the use of a Segregated Commercial. Still, this sometimes produces a Franchise Zombie. However, Tropes Are Not Bad—some fandoms like the merchandise more so than the show itself.

Many musicals ensured that potential hit tunes were reprised a few times. This was as much for the sake of the song publishers as for dramatic opportunities like the Dark Reprise. The revues, which were formed around Sketch Comedy and had little to no plot, could get quite shameless: some of them explicitly introduced song reprises as a ploy to sell sheet music.

Note that a show can have a line of licensed merchandise without being Merchandise-Driven, and once the requirements are met the writers are basically given free rein to script what they want. Peanuts creator Charles Schulz was famously quoted as saying there is nothing wrong with using characters in marketing, so long as the quality of one's work stays refined. That said, Bill Watterson has famously taken no chances, and limited Calvin and Hobbes to the print medium, to prevent any decay in quality. (Unfortunately, this caused people to just make offensive unauthorized merchandise...)

Also note while this can often be the main reason for a show's existence, it is never the only reason, that's what actual commercials are for. Shows of this nature always do their best to tell a story and to keep the viewers hooked with said story. Keep that in mind whenever viewing a show that falls under this trope.

It's also notable that, when the series is particularly well-done, it may outlive the product that inspired it. This seems to be particularly true of comic books, such as ROM Spaceknight and Micronauts. It's also common for merchandise driven shows to develop a cult following that long outlasts the original merchandise; such a fanbase may result in its eventually being Uncanceled (usually with accompanying new merchandise), as the current incarnations of Transformers, G.I. Joe, and others can attest.

Compare Misaimed Marketing, where this sort of thinking is applied where it shouldn't be. See also Defictionalization, where the licensed merchandise is also merchandise inside the show; and Breakaway Advertisement. Contrast with The Merch, where the merchandise sales came after the work, in order to support it. For derivative works that are (usually) not metatextual focus of the original work, see Tie-in Novel and Licensed Game.

There is a fine distinction between this trope and The Merch. Basically, if you can find no evidence that either the program was created to market a toy line, or the people involved with the toy line have creative control, then your example belongs under The Merch and not here at Merchandise Driven.

See also Product Promotion Parade, a common occurrence in Merchandise Driven works, and Cash Cow Franchise. The Sixth Ranger is a common trope in these works, due to the addition of toyetic new characters.

Examples of Merchandise-Driven include: