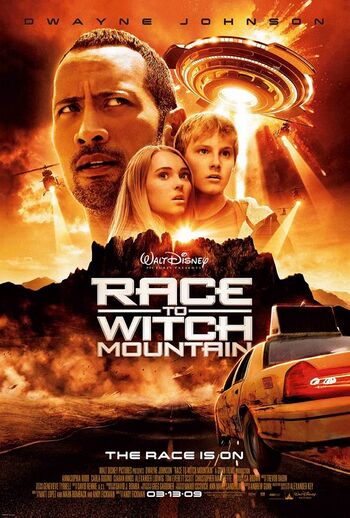 Race to Witch Mountain is a 2009 Disney action film starring former wrestler Dwayne Johnson. It is a remake/reboot of the Witch Mountain movies from The Seventies (Escape To, Return To, and Beyond) The story consists of two aliens (who look just like humans) crash landing on earth. The Government takes their ship to a top-secret research facility, Witch Mountain. From there the two aliens; Seth and Sara hail a cab, brandish a large wad of money, and tell the driver, Jack Bruno, to go "that way". They end up at a run-down house. The cab driver follows the teenagers inside (against their will). The teenagers activate a secret passage and end up at a lush, tropical paradise. They find a large, gooey orb and extract a device from it. Then they get attacked by a large, mechanical "suit of armor".

Tropes used in Race to Witch Mountain include:
Retrieved from "https://allthetropes.org/w/index.php?title=Race_to_Witch_Mountain&oldid=1836218"