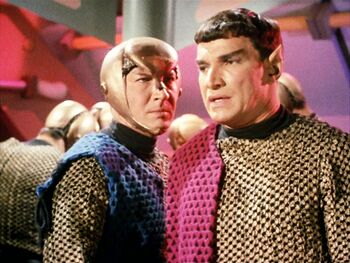 You both look familiar.

The USS Enterprise is on duty near the Romulan Zone border, and things are calm enough that Kirk can preside over a wedding between two crew members. An urgent call from an Outpost interrupts the wedding, and the ship discovers that a series of outposts have been destroyed by a new energy weapon. A lucky interception of a message from an unseen space ship allows Kirk and crew to find out who they are up against: The Romulans. Using a single cloaked ship firing the most lethal weapon ever witnessed. And The Enterprise is the only one who can stop them...

Tropes used in Balance of Terror include:
Retrieved from "https://allthetropes.org/w/index.php?title=Star_Trek/Recap/S1/E14_Balance_of_Terror&oldid=1775347"