Difference between revisions of "The Amazing Chan and The Chan Clan" 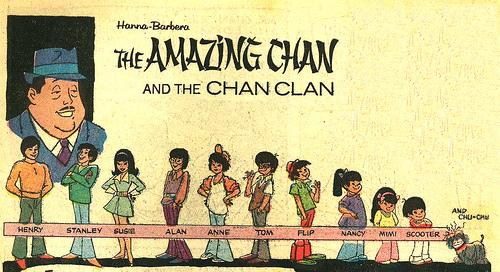 The Animated Adaptation of the Charlie Chan series, this Hanna-Barbera series from 1972 on CBS marked the first time — and still the only time in the Occident — that the Chan character was played by an ethnically Chinese actor: Keye Luke, who had himself played Number One son, Lee Chan, in the Twentieth Century Fox series of films back in the 1930s. It is notable that Hanna-Barbera did not emulate the iconic Genghis Khan moustache and beard, Panama hat and white linen suit of the Charlie Chan of the 1930s and 1940s; their Mr. Chan sported a pencil moustache, a short-brimmed pork-pie hat and a blue blazer.

More importantly, the cartoon featured not only the Chinese detective himself, but his numerous progeny (plus dog Chu-Chu), who would make more — or sometimes very much less — effective efforts to help "Pop" out in his cases. This motif, which had figured slightly in the old films, was brought to the fore in line with H-B's other "meddling kids solving mysteries" series, and like many of them, featured the kids as a musical group, in this case called "The Chan Clan". Another added feature was the "Chan Van", which could disguise itself as another form of vehicle at the press of a button — this idea would be reused for Hong Kong Phooey's "Phooeymobile".

Tropes used in The Amazing Chan and The Chan Clan include:
Retrieved from "https://allthetropes.org/w/index.php?title=The_Amazing_Chan_and_The_Chan_Clan&oldid=1808470"
Categories: