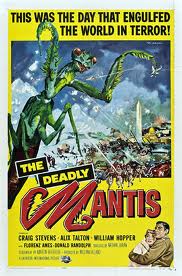 The Deadly Mantis is a 1956 American film concerning the then-popular mutation and animation of a giant beast, usually prehistoric. In this case, the beast is the eponymous mantis, loosed in the opening sequence of the movie, where it proceeds to destroy many things, progressively eating more people, until an ace pilot shoots it down and kills it. Interwoven into this tale is a romantic sub plot involving the photographer Miss Blake and Colonel Joe Parkman, the Ace.

Tropes used in The Deadly Mantis include:
Retrieved from "https://allthetropes.org/w/index.php?title=The_Deadly_Mantis&oldid=1548351"
Categories: