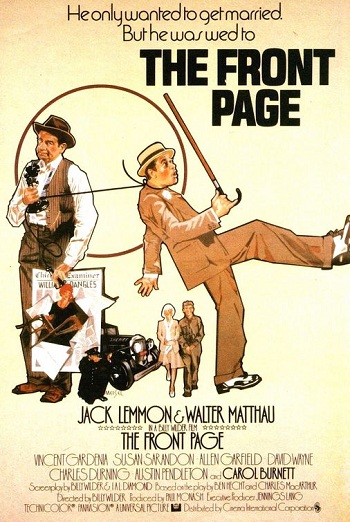 "Can two divorced men work in a newspaper office without driving each other crazy?"

A 1974 film, starring Jack Lemmon and Walter Matthau. An adaptation of the 1929 play of the same name.

Walter Burns (Matthau), editor of the Chicago Examiner, wants Intrepid Reporter Hildebrand "Hildy" Johnson (Lemmon) to cover the execution of convicted murderer Earl Williams--but Hildy announces that he's quitting the newspaper business, getting married, and moving to Philadelphia. Burns promptly sets out to lure Hildy back, mainly by sabotaging his engagement to the sweet but bland Peggy (Susan Sarandon). Then, when Hildy goes to the courthouse to say goodbye to the other reporters, Williams escapes, and Hildy gets drawn back into the game as he senses a lead and starts uncovering the political machinations behind Williams' arrest and pending execution.

The Front Page is the third of four film versions of the play. It was preceded by a 1931 version starring Adolphe Menjou and Pat O'Brien, and by His Girl Friday in 1940; it was followed by Switching Channels in 1988, which updated the story from newspapers to TV.

Tropes used in The Front Page include:
Retrieved from "https://allthetropes.org/w/index.php?title=The_Front_Page&oldid=1688029"
Categories: