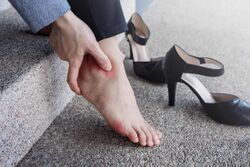 Stylish and svelte as it may seem, but fashion hurts and women pay for it dearly.

High heels are arguably a quintessential part of being a woman. They're stylish, they give a normally short-statured woman a boost, and people wearing it tend to walk in a unique stride.

The problem with it: it hurts. On top of podiatrists and general practitioners dissuading females from wearing extremely high heels out of health and posture concerns, heels break easily, and that makes for a rather humiliating sight especially in a formal setting such as a party or a business meeting.

This trope can show up as part of a tomboy's Femininity Failure. Can result in a Broken Heel at an inopportune time.

And no, this isn't about heels in Professional Wrestling dishing out damage to a face from high above, either.

Examples of High Heel Hurt include: