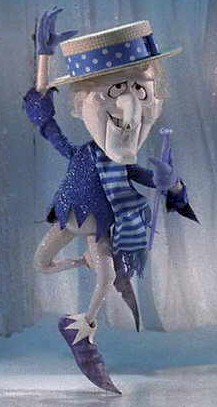 Bob Fosse said that most songs fall into two categories: the "I Want" Song and the "I Am" Song. The "I Am" Song is, simply put, a song which establishes a character's personality, role in the plot, and/or motivations right away. It can be more effective than setting up a character by dialogue, and it's almost always more fun.

Despite the name, the song doesn't have to be sung by the characters themselves. "The Villain Sucks" Song is an example of an "I Am" Song sung by other people about a villain they despise.

May also be an I Am What I Am song, but not always.

Note: Contrast the "I Want" Song. Although the two are not mutually exclusive, the "I Am" Song should be primarily about who the character is, rather than what they want (there's a clue in the name). Try to avoid citing an "I Want" Song as an "I Am" Song.

Compare Villain Song, which are almost always of this type (when they aren't "I Want" Songs). See also Leitmotif for an instrumental version. Image Song is when it doesn't appear in the actual show, but rather in All There in the Manual extras. See "I Am Becoming" Song for when a character explains his or her new motivations or self.

Examples of "I Am" Song include:

Retrieved from "https://allthetropes.org/w/index.php?title=%22I_Am%22_Song&oldid=1878222"
Categories:
Cookies help us deliver our services. By using our services, you agree to our use of cookies.