"Join the Army," They Said 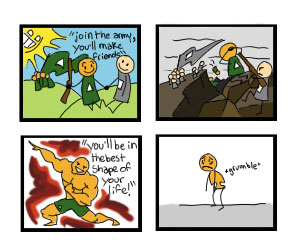 We joined the Navy
To see the world
And what did we see?


We saw the sea
—"We Saw the Sea", Irving Berlin

"Join the army" they said, "it'll be FUN" they said.
—Engineers, Company of Heroes

Military recruitment ads, appearing on TV or in print. There are two ways to go with these:

Examples of "Join the Army," They Said include:

Would you risk your life for someone you don't even know? (Beat) We do.

Johnny Cage: "Come to a little tournament", he said. "(It'll) Be good for the career", he said. Yeah, right.

Statler: "Take a cruise," you said. "See the world," you said. Now here we are stuck on the front of this stupid ship.
Waldorf: Well it could be worse. We could be stuck in the audience!
Both: Do-ho-ho-ho-hoh!

Join a smuggling group, she thought darkly for about the fifth time since beginning her climb. Visit a side of the galaxy the tourists never see.

Rather a thousand times the country jail
Than to lie under this marble figure with wings,
And this granite pedestal

Its a man's life in the British Dental Association!

He said, "Son,
Have you seen the world?
Well, what would you say
If I said that you could?
Just carry this gun,
You'll even get paid."
I said, "That sounds pretty good."

"Join the Imperial Guard! Travel to fantastic new planets! Meet exotic new life forms! And then shoot them! Serve the Emperor today - tomorrow you may be dead!"

"Greeting, inferior beings of Polaris. Does you life lack a sense of purpose? Do you constantly worry about finding steady income? Do you enjoy killing stuff? Then join the imperial army and aid me on my humble quest for Galactic domination! Here, you'll travel to interesting places, meet interesting people, and execute them in the name of me."

"I joined the army to get money to go to college, I didn't know I would end up in a war!"

In and out, they said. A show of force, they said. The Helghast war machine was destroyed on Vekta, and you guys just need to sweep it up, they said.

"Daybreak, Jakarta. The proud men and women of the Navy are protecting America's interests overseas, but you're in Lubbock, Texas hosing down a statue, because you're in the Naval Reserve. Once you complete basic training, you only work one weekend a month, and most of that time you're drunk off your ass. The Naval Reserve: America's 17th line of defense, between the Mississippi National Guard, and the American League of Women Voters."

Skarr: Join the military, my mother said! The military! Curse you mother! Curse you! Curse my luck!