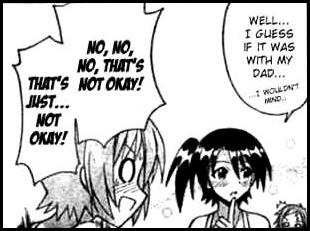 She's talking about kissing. Either that or Ako is vehemently opposed to family picnics.

What a character says when something is wrong or stupid or Squicky enough.

The usage tends to be:

A step beyond "That's just wrong" or "That's wrong on so many levels." The step beyond that is a Visible Silence.

See also Flat What, Dude, Not Funny, Sick and Wrong, This Is Wrong on So Many Levels. It can be followed, preceded or coupled with a Rapid-Fire "No".

No real life examples, please; This trope is for In-Universe examples only. It is not to be potholed for anything tropers themselves find squicky.

Examples of "No. Just... No" Reaction include: