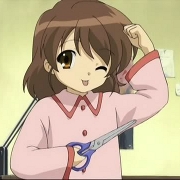 A self-inflicted version of the Dope Slap, this is when a character hits herself softly on the head, winks, and sticks her tongue out after tripping, dropping or doing some other mistake in acknowledgement of her blooper. As it is considered a childish and endearing mannerism, this gesture is most often employed by a klutz, the overly cute, or The Ditz. Though the female pronoun is used throughout this article, the "Silly Me" Gesture is not Always Female and can be found, for instance, in many a Keet's repertoire.

Sticking the tongue out is sometimes forgone from the gesture, but other variants are also possible. Another gesture that is used in similar circumstances but conveys a somewhat different image is the Hand Behind Head.

Examples of "Silly Me" Gesture include: