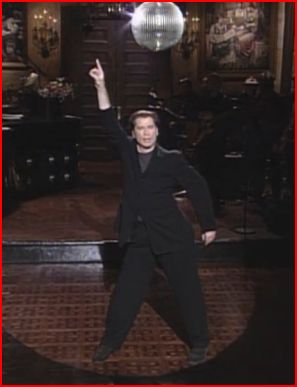 A Stock Parody and Stock Pose, when somebody dances in fiction, they're likely to mimic John Travolta's iconic pose from Saturday Night Fever, with their arm stretched out and hand pointing toward the sky.

Related to Everythings Funkier With Disco.

Travolta: It's just fun to have a new film like Pulp Fiction and forget about the old ones. What is that? Is that a light? points upward in this fashion