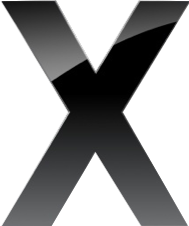 This is the greatest letter in the world. Especially in Triplicate.

Leela: You're blackmailing me?
Bender: Blackmail is such an ugly word. I prefer 'extortion'. The 'X' makes it sound cool.

There's always something about the letter X that just makes anything cool (including this article). A lot of people use it gratuitously on a name, product, model, etc. just so it as some sort of edge to it. Want some pizazz? Add an X somewhere in the name. It doesn't matter where, as long as there's an X. And it has to be a capital X. Lowercase x is just too puny to be cool.

In order for this trope to work, though:

See 4X and Xtreme Kool Letterz, for tropes that make use of this. See also, Let X Be the Unknown. Not to be confused with [A Metasyntactic Variable As Portrayed In This Case By X] Makes Anything Cool.

X-amples of X Makes Anything Cool include:

Martin: Research says that shows with "X" in the name get higher ratings.