'Twas the Night Before Christmas 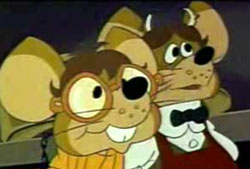 A 1974 animated Christmas Special from Rankin/Bass Productions starts when the town of Junctionville has all of its letters returned from Santa Claus -- because a letter proclaiming Santa and his reindeer are fakes has appeared in the local paper and offended the jolly old elf. Father Mouse (George Gobel) investigates, and realizes his know-it-all son Albert (Tammy Grimes) has written the letter. Meanwhile, clockmaker Joshua Trundle (Joel Gray) tries to makes a singing clock in hopes of bringing Santa back. Things go from bad to worse when the clock publicly malfunctions -- but in the end, with the help of a Heel Face Turn on Albert's part, a happy Christmas ensues. Unlike most R/B productions, this featured 2D animation, rather than the usual Stop Motion puppet animation (called "Animagic").

Tropes used in 'Twas the Night Before Christmas include:
Retrieved from "https://allthetropes.org/w/index.php?title=%27Twas_the_Night_Before_Christmas&oldid=1750688"
Categories: