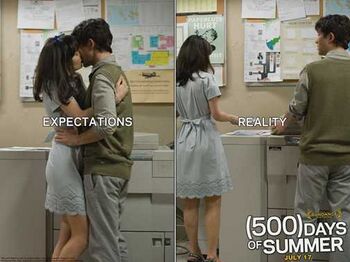 "This is a story of Boy Meets Girl, but you should know up front, this is not a love story."

Tom Hansen works as a writer for a greeting-card company; Summer Finn is a quirky young woman hired as his boss's assistant. Tom, a hopeless romantic, immediately falls for her; Summer doesn't believe in true love, and isn't looking for a relationship. They quickly become more than just friends, but while Summer doesn't consider their affair to be serious, Tom believes she's "the one", and wants something more. The film takes a look at their quasi-relationship from Tom's perspective, numbering the days and events that lead to its buildup and eventual downfall.

Directed by Marc Webb (from a script by Scott Neustadter and Michael H. Weber), the film has been praised by critics for eschewing romantic comedy cliches. Instead, it portrays the highs and lows (mostly lows) of a modern relationship and the fractured way in which we remember them.

Tropes used in (500) Days of Summer include:

Rachel: Just because some cute girl likes all the same bizarro crap you do doesn't mean she's your soulmate.

Summer: All we do is argue.
Tom: That's bullshit!

"Yes, Summer has elements of the Manic Pixie Dream Girl -- she is an immature view of a woman. She's Tom's view of a woman. He doesn't see her complexity and the consequence for him is heartbreak. In Tom's eyes, Summer is perfection, but perfection has no depth. Summer's not a girl, she's a phase."