Everything About Fiction You Never Wanted to Know.
Jump to navigation Jump to search
/wiki/(həd) Planet Earthcreator 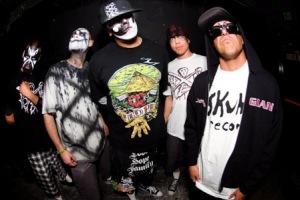 The band's line-up is not the same as when they started. In fact, the line-up might change by the time you finish reading this.

Hed PE (also known as (hed) Planet Earth and stylized as (həd) p.e. or as (Hed)pe or (Hed)PE) is a Punk Rock band from Huntington Beach, California. Their style of music, dubbed "G-Punk", draws mainly from Punk Rock and Hip Hop, touching upon Hardcore Punk, Reggae, and occasionally Funk, Jazz and Heavy Metal.

Their lyrical subject matter is quite diverse, ranging from some of the more frivolous subject matter of Gangsta Rap (pot smoking, sex, etc.) to more political topics. Vocalist Jared is also heavily interested in conspiracy theories, like government cover-up of alien life, the Illuminati, etc.; because of this, Hed PE is often overlooked or downright condemned, despite the diversity of their music.

Members: The band has had many line-up changes over the years; this list may or may not be the current line-up.