Everything About Fiction You Never Wanted to Know.
< .hack(Redirected from .hack GU Games)
Jump to navigation Jump to search 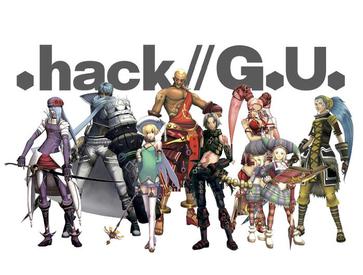 Taking place after the events in .hack//Sign and the original .hack games, the popular MMORPG "The World" is open for business yet again. Well, the new World. The old one was destroyed when the servers mysteriously burned down. The new world is a bit Darker and Edgier these days with all the Player Killing. The PKK (Player Killer Killer) from .hack//Roots, Haseo, has become legendary in his own right. As The Hunter; he has killed hundreds of Player Killers and has gained the title The Terror Of Death. Yes, the same title the first Boss in the first game series had. He is hunting down a mysterious Player Killer known as Tri-Edge, for this mysterious Tri-Edge PK'd Haseo's friend Shino, and she fell into a coma in real life.

After being attacked and Data Drained by Tri-Edge, Haseo is found by a mysterious organization known as Raven, and joins their ranks, unleashing a hidden power in his character data known as Skeith.

All the while, a mysterious computer virus called AIDA is threatening the existence of "The World" and quite possibly the entire Internet.

Tropes used in .hack//G.U. include:
Retrieved from "https://allthetropes.org/w/index.php?title=.hack//G.U.&oldid=1672136"
Categories:
Cookies help us deliver our services. By using our services, you agree to our use of cookies.