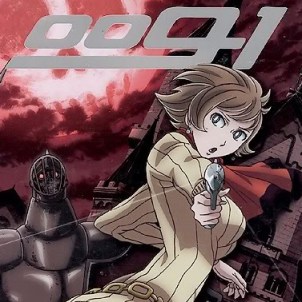 009-1 (Zero Zero Nine One) is a spy-fi anime series based on a manga series by famous manga artist Shotaro Ishinomori. It was first broadcast on Tokyo Broadcasting System (TBS) in Japan in October 2006. The original manga was named "Zero Zero Ku-no-ichi", a pun on kunoichi and a reference to the main character's occupation as a spy, and was serialized in Weekly Manga Action from 1967 to 1970, then returned briefly in 1974. It concerns Miléne Hoffman (Mirēnu Hofuman; "Mylene" in the English translation), a female cyborg with machine gun breasts who works as a secret agent. Prior to the anime, it had been adapted into a live-action drama for Fuji TV in 1969 entitled "Flower Action 009ノ1".

Although it was also created by Ishinomori, and features similar themes, this seinen manga, despite the "00" name and the cybernetized protagonists, has no relation to his previous work Cyborg 009, a shōnen manga (although in the original manga, the cyborgs from Cyborg 009 actually make appearances in some chapters).