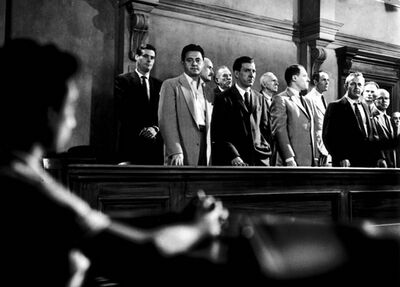 If the boy only knew what headaches he was about to cause...

12 Angry Men is a 1954 teleplay by Reginald Rose (and perhaps more famously, a 1957 film directed by Sidney Lumet and starring Henry Fonda and a veritable All-Star Cast of character actors) that concerns a supposedly straightforward murder trial. An eyewitness, forensic evidence, and the accused himself all seem to clearly point to an adolescent boy murdering his father. While most of the jurors want to pack it in and call it a day, one stands up and refuses to admit to the boy's guilt -- at least until they take a fine toothed comb through every shred of the evidence and make darn sure that they've got the right guy.

This work is best known as the film that popularized the Rogue Juror trope. Though it was not the first work to use it, it was the first to receive widespread critical acclaim. It's a classic of American cinema and recommended watching - if only because most of the other works on the Rogue Juror page reference it either directly or indirectly.

According to the American Film Institute, it's the second best courtroom drama movie in history, after To Kill a Mockingbird‍'‍s film adaptation. In 1997 it was adapted yet again, this time as a Made for TV movie on Showtime starring Jack Lemmon and George C. Scott (the main difference in this version being the level of cussing). There is also a 2007 Russian Adaptation by Nikita Mikhalkov called simply 12.

Tropes used in 12 Angry Men include:
Retrieved from "https://allthetropes.org/w/index.php?title=12_Angry_Men&oldid=1921832"
Categories:
Cookies help us deliver our services. By using our services, you agree to our use of cookies.