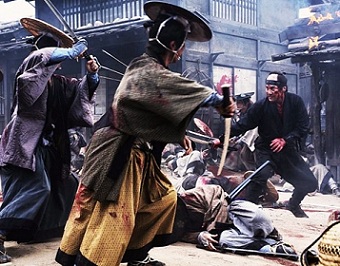 13 Assassins is a 2010 chanbara film from director Takashi Miike.

The setting is Feudal Japan, 1844. Lord Naritsugu is the younger brother of the shogun, which affords him the unchallenged right to murder, rape, torture, and mutilate on a whim. After a high-ranking official protests Naritsugu's latest outrage by publicly committing Seppuku, a conspiracy is formed within the shogun's senior council to eliminate Naritsugu before his madness plunges the entire nation into anarchy. A veteran samurai named Shinzaemon is recruited to accomplish the suicidal task, assembling a ragtag group of twelve warriors (including one enigmatic vagrant) for one last chance at an honorable death in an age of peace. They quickly transform a sleepy little village into a booby-trap laden killing gound, preparing to ambush their target before he reaches the safety of his estate. But even with surprise and skill on their side, can the small group of assassins possibly hope to prevail against Naritsugu's private army of more than 200 soldiers? In a word? Yes.

Tropes used in 13 Assassins include:
Retrieved from "https://allthetropes.org/w/index.php?title=13_Assassins&oldid=1544007"
Categories: