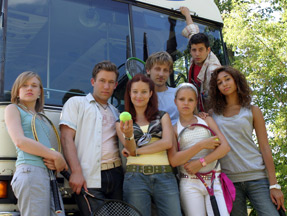 15/Love was a Canadian-produced television series revolving around the lives of the students at Cascadia, a British Columbia private school geared towards aspiring tennis players. The show ran for three seasons and fifty-four episodes, beginning in September of 2004 and finishing in October of 2006. The show was notable for having had not one, but two of its main characters killed off in the Season 1 finale following the tragic Real Life deaths of their actors in a car crash.

The show's characters remained more or less consistent from season to season, with Cody Myers, Adena Styles and Gary "Squib" Furlong present from the first episode until the last. Other mainstays included school president Harold Bates, Butt Monkey Rick Geddes, and child tennis prodigy Sunny Capaduca. In Season 1, Megan O'Conner and Sebastian Dube were also a part of the main cast; following their actors' deaths they were replaced by Tanis McTaggart and Cameron White in Season 2, and Cassidy Payne and Jesse Siegel in Season 3. Coach Artie Gunnarson, present in both Seasons 1 & 2 was replaced in Season 3 by Coach Brock, and Nate Bates, the school president's son joined the cast.

The show was broadcast on YTV and enjoyed a relatively successful run, given the odd premise.

Tropes used in 15/Love include:
Retrieved from "https://allthetropes.org/w/index.php?title=15/Love&oldid=1738503"
Categories: