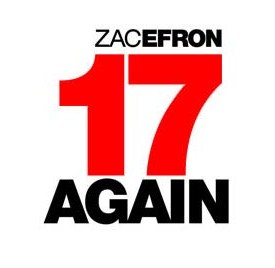 Mike O'Donnell is the star of the high school basketball team, his girlfriend is the hottest girl in school, and he's about to be offered a scholarship. But his life takes a turn for the worse after he discovers his girlfriend is pregnant.

Flash Forward twenty years, and his life hasn't improved. His wife has kicked him out, his kids hate him, he's just been fired, and he's living with his geeky but much richer best friend. After going to his old school to pick up his kids, Mike is approached by a mysterious janitor whom he tells that he'd do anything to relive the Glory Days. On his way home, Mike sees the same janitor about to jump off a bridge. Rushing to save him, he topples over the edge and lands in a whirlpool.

When he crawls out and gets back to his friend's place, Mike discovers he's been turned into Zac Efron his 17-year-old self. Now he has a chance to sneak into the lives of his family and get another chance at the life he wanted.

Tropes used in 17 Again include:
Retrieved from "https://allthetropes.org/w/index.php?title=17_Again&oldid=1828762"
Categories: