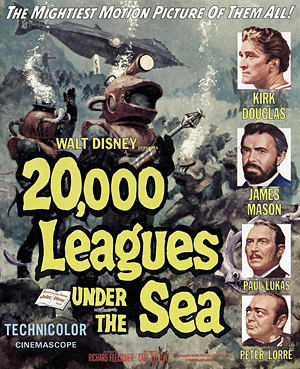 A 1954 film adaptation of the book by Jules Verne made by Walt Disney Pictures - its first live-action science fiction film. The film featured an all-star cast (Kirk Douglas as Ned Land, Peter Lorre as Conseil, and James Mason as Captain Nemo) and a memorable design for the Nautilus. It won Academy Awards for Best Art Direction and Best Special Effects and has become one of Disney's classics.

Tropes used in 20,000 Leagues Under the Sea include:

Ned: "Go ahead!" [sticks out chin]
Conseil: "Well if you insist." [punches Ned in the stomach]