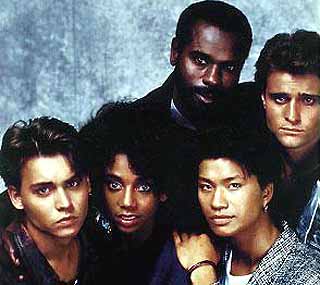 The 1980s version of The Mod Squad, with a somewhat more believable premise. The series lasted from April, 1987 to April, 1991, with a total of 103 episodes in five seasons.

Here, it's about the cases of a special undercover police unit where young-looking police officers infiltrate schools to investigate youth-related crimes.

The series made Johnny Depp a star, but a Teen Idol was the last thing he wanted to be. As such, he quit at his first opportunity, which made the show Jump the Shark at that moment.

Currently the episodes are available for streaming on Youtube--unfortunately without the original soundtrack.