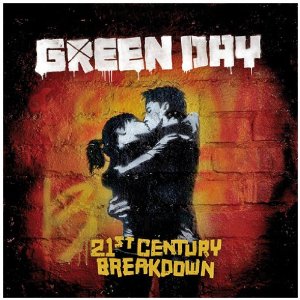 21st Century Breakdown is a Rock Opera by the rock band Green Day released as a follow-up to their popular album American Idiot. The plot follows two lovers named Christian and Gloria, who are followed in the story as they witness the many new trials faced by the common man in the recent years of America (Mainly told in first-person from the point of Christian).

Several of the themes looked at by Christian (Who is most definitely not a terrorist) include religion, politics, and vengeance, along with being heavily involved in his relationship with Gloria. He is very cynical about most large organizations, and feels he and Gloria must stand up for The Everyman. Gloria, meanwhile, is trying to hold onto her original beliefs while trying to help Christian as well.

Several tracks, including "Know Your Enemy" and "21 Guns", are used in the Broadway production of American Idiot.

The Album is Seperated into three acts.

Tropes used in 21st Century Breakdown (music) include:
Retrieved from "https://allthetropes.org/w/index.php?title=21st_Century_Breakdown_(music)&oldid=1646223"
Categories:
Cookies help us deliver our services. By using our services, you agree to our use of cookies.