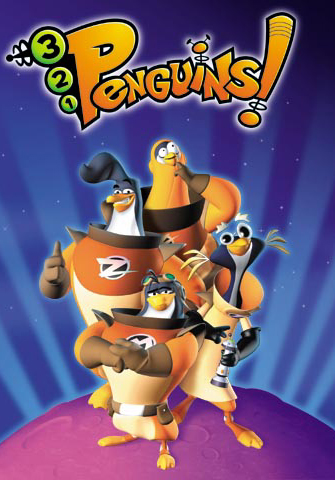 Produced by Big Idea Productions (the guys who made Veggie Tales), 3-2-1 Penguins! stars twin siblings Michelle Frances Conrad (who is older by five minutes) and Jason T. Conrad. Both have been shipped off to stay with their very British "grandmum" for the summer, while their parents go...someplace else.

In the Pilot Episode, Jason mopes around because he would much rather be at Space Camp, and as evening falls on their first day at the cottage, he is bored out of his skull after their television blows a fuse. Michelle, on the other hand, has found a set of porcelain penguins and is rather enjoying herself when Jason happens upon the hidden attic. Upon investigation, the twins find a bunch of old toys and games, as well as a large telescope. When Michelle hogs the telescope, Jason stuffs her penguins into a toy spaceship and accidentally drops them both. Rather than breaking, the ship bounces around before springing to life. The now living and sapient penguins "galeezel" Jason into the toy ship and whisk off into space to deal with a distress call.

In Episode 2, it's Michelle's turn to take a ride with the penguins, and from then on, one or both of the twins would join the penguins as they traveled through the stars, helping various Amusing (and less-than-amusing) Aliens with whatever the universe decided to throw at them. Astonishingly, the solution to each location's problem usually hinges on something Grandmum tried to teach the kids earlier.

Since the show is targeted at a slightly older demographic than that of Veggie Tales, there's a distinct lack of musical numbers in each episode (but not Big Idea's trademark humor). However, at the end of most episodes, the Penguins attend Amateur Night at the Comet Lounge where they sing a song related to the episode's moral lesson.

The series was initially a set of six direct-to-video episodes, released between November 2000 and 2003, but after a four-year hiatus, the show was picked up by NBC's Qubo block and has since gained two additional seasons.