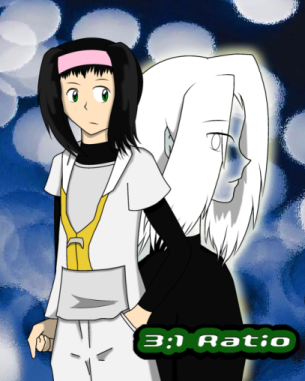 Three to One Ratio (Simplified as 3:1 Ratio) is an unfinished Web Serial Novel. It is authored by Half Demon Cali, who also writes Mabaka! as her primary publication.

Takumi is what those in the afterlife call a genborei - A ghost who was never human to begin with. One who just appeared out of nowhere one day. He has a puzzling fascination with humans, has a 'body' that ages according to the Gregorian calendar, and has transluscent skin. He was also taken up as an apprentice to the Guardian of Space and Time, whom he nicknamed Yomi for ease.

Takumi's fifteenth deathday is closing in, which will be his second age of maturation. Another genborei, Kenga, inspires to use Takumi's latent energy for his own once they've evolved. So what does Yomi do? To keep Takumi out of reach, he sends him to Earth so his student can learn a thing or two about the beings he is so enamored with - Complete with a human skin.

For six months, Takumi will live at the Ishimura residence under the guise as a transfer student from Spain while handling the family's martial arts loving daughter, a classmate and guide who doesn't particularly like him, an Ambiguously Gay midget, and a girl who dyes her hair and changes personalities in and out of school. Nothing he can't handle.

Originally intended as a oneshot, the author s planned to make this a minimum of five chapters and a maximum of ten. Only two were ever published

Can be read on Fiction Press here.

Tropes used in 3:1 Ratio include:
Retrieved from "https://allthetropes.org/w/index.php?title=3:1_Ratio&oldid=1730281"
Categories: