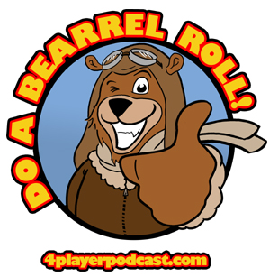 A live show about video games.

Any combination of the four plus one or two guests will record a weekly podcast discussing new video games, the state of the video game industry as a whole, and their hopes for new games coming out. On top of that, they also record Dinner Time Podcasts (recorded while out to eat), Revival Podcasts (centering on an older game), and Top Five podcasts (each of the podcasters giving their "top five" of a certain subject). The Cocktail Time Podcast was a side podcast created and hosted by Joseph, with the participants (usually Nick, Carlos and Nolan) focusing their discussions on the video game industry, all the while drinking alcoholic beverages.

The podcast wraps up with the 4Player Minute, with each player stating a shameful secret (something they did recently that they are ashamed of), sweaty palms (something game-related that they are worried about), and hype (something game-related that they are excited about). David hosts his own mini-segment, known as chatter of the week, where he gives an honorable mention to a chatter who contacts him via e-mail. Brad's own unofficial segment is the "Fuck You Of the Week," where he chooses one particular person who is worthy of a Take That. Occasionally, at the end of a podcast, Brad would host his own mini-show called "Cooking With Brad", where he eats/drinks random snacks whenever he's hungry. Games that they're about to broadcast on the feed are addressed by Brad in another mini-segment called "This Week On the Feed".

They held a sister channel called Japancast, where they broadcast anime and music videos, hosted by Juan and Matt, with David, Aryton and Daniel as guest-hosts. With Matt in college, Juan working at two jobs and the other two being MIA, Japancast is rarely used anymore, other than a backup channel for 4PP when they get issues on JTV issues. The main station of 4PP is in Austin, Texas, though they're known for broadcasting at different hotels, usually whenever they're at an E3 convention.

Notably, 4PP has won Podcast Awards for three years in a row (2009 - 2011), beating out Giant Bomb (their toughest rival), Hot-Blooded Gaming, The Instance and ESPN Podcast, among others.

Tropes used in 4Player Podcast include:
Retrieved from "https://allthetropes.org/w/index.php?title=4Player_Podcast&oldid=1763961"
Categories: