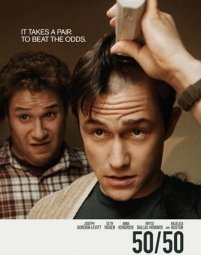 50/50 is a 2011 comedic drama starring Joseph Gordon-Levitt as a young man battling cancer.

Adam Lerner, a Seattle twentysomething who doesn't smoke or drive, goes to the doctor about a persistent back pain. It turns out to be a rare form of cancer, and Adam is immediately put into chemotherapy. The film shows how he deals with the disease, focusing in particular on the relationships he has with various people in his life. These include his detached girlfriend Rachael (Bryce Dallas Howard), his loyal but excessively laddish best friend Kyle (Seth Rogen), novice therapist Katie (Anna Kendrick), needy and protective mother (Anjelica Houston) and a group of fellow cancer sufferers with whom he has a sort of support group.

The film was based on the life of the screenwriter, Will Reiser, of whom Rogen has long been a close friend. Thus, Rogen's role in the film was essentially a reenactment of what he did for Reiser.

Adam: You should go.
Rachael: [Kissing him] I don't want to go. I want to stay here with you.
Adam: No, seriously... you need to get the fuck off my porch.