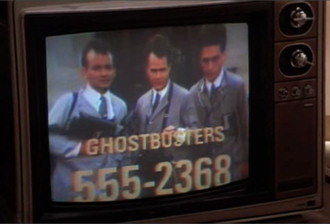 Who you shouldn't call?

Virtually all US phone numbers on fictional programmes are made up of the following:

"555" is an exchange number commonly thought to be reserved by the phone companies for use by TV and movies in order to prevent misdial phone calls to real people. In fact, only 555-0100 through 555-0199 are now specifically reserved for fictional use, and the other numbers have been released for actual assignment. The 555 exchange was originally useful for this purpose because it was (in North America) reserved for various internal phone company service numbers, so calling one of the 555 numbers would not have reached an actual customer.

In the United States and Canada, calling 1-###-555-1212 reaches an area code ### directory assistance operator. The same information is available for local numbers in the North American Numbering Plan countries by dialling 4-1-1, one of the N11 codes; all wireless carriers offer nationwide listings with 411, and some offer additional Enhanced Directory Assistance services.

As the standard number 555-1212 exists in all Canadian and US geographic area codes (so that directory assistance for a remote or non-local area code is available at 1-area code-555-1212) this has caused telephone companies de facto to reserve the entire 555 exchange for information numbers in every area code nationwide. While only 555-0100 to 0199 are explicitly reserved for fictional use, most or all of the other possible 555-xxxx numbers are left unused. (Other common North American reservations included 958- and 1-###-959 for test numbers, 950- for access to alternate long-distance carriers, and anything with a leading 0- or 1- in the area code or the seven-digit local number. A '9' in the middle digit of the area code is also reserved for future numbering plan expansion. 555 as an area code, in the format 1-555-NXX-XXXX, is also unused and reserved due to similarity to the information numbers.)

There are exceptions: the exchange prefix 555 is valid for toll-free +1-800 numbers (e.g. 1-800-555-xxxx, but not any other freephone prefix like 1-888, 877, 866, 855, 844 and 833). The prefix may also be a valid exchange in some other country outside the North American Numbering Plan; this happened often in Australia before that country's local numbers were lengthened to eight digits.

In the days when telephone exchanges had names, 555- was usually rendered as "KLondike 5" (on, e.g., The Honeymooners); the practice persisted for quite some time after everyone in the real world had stopped using the system. The Simpsons have used variations such as JL5 and KL5, and in the movie Ghostbusters, the heroes' phone number starts with KL5.

Alternatives include "invalid" or incomplete numbers, one of the most famous of these being "Call BR 549" from Hee Haw. The Hey Arnold! episode "Harold's Kitty" does both: Arnold's number is 555-123.

The Nanette Workman song "Callgirl" gives what purport to be Montréal telephone numbers for a sex worker in four languages (French, English, German, Spanish); the German number contains the nonsense word "drufnuf" as one of the digits, the Spanish number uses 203-XXXX at a time when a 0 or 1 in the second digit was reserved for telephone area codes (this reservation no longer exists). The B-side of the B52's single "Rock Lobster" had a song titled 6060-842 with the lyrics "Operator, what's wrong? I dial stupid number all day long. The operator said: your number's been disconnected, your number's been disconnected, your number's been disconnected..." as 606 at the time was not a local exchange but an area code for Kentucky, rendering the number invalid.

Often, as numbers become scarce, national authorities will change the numbering system - and possibly make what used to be an invalid number become real.

Some very enterprising shows have instead simply bought real numbers and connected them to additional content relevant to the show. This was done for Scrubs - for a few weeks, calling Turk's new cell phone number connected you to a phone that was actually on the set, and if you were lucky enough to call when somebody was there, you ran a good chance of getting to talk to the cast and crew. This was used widely in the Alternate Reality Game promotion for the movie A.I.: Artificial Intelligence, but the practice is far more common for URLs than for telephone numbers.

This also appears in Easter eggs in various media, where a creator or studio will hide their own number somewhere in a work, such as the number on a control panel in Monsters Inc, which is Pixar's telephone number.

As with domain names, there is the risk that any real phone numbers will be reassigned to someone else once the studio stops renewing the subscription. If the number is in a non-geographic or freephone prefix, it also risks not working at all for international calls. Storing a prerecorded game clue on a real telephone number? When that number goes dead, the whole game is that little bit less playable. For instance, the licensed NES game of Who Framed Roger Rabbit? used a real number for this toll-free message:

There are US FCC regulations which are supposed to prevent hoarding, brokering and warehousing of numbers. They're not enforced. Disconnect a +1-800 and it will be cybersquatted within milliseconds of it becoming available for assignment to new subscribers. Domain names (where there is no regulation) are just as bad for this, or worse.

Some motion pictures have used telephone numbers starting with '1' as, in North America, real telephone numbers cannot start with a 1 or a 0, due to technical requirements.[1] Sony Pictures Legal Department permits its TV shows to use any area code (except 800 or 888) followed by a "1" or "0" as the first digit of the seven-digit phone number. (e.g., [310] 074-2566, [213] 177-4305) Many major studios share this policy on advice from their lawyers. In contrast, almost all numbers in many European countries start with 0, which is omitted when one dials internationally.[2]

One of the things that have been done in Southern California is that a lot of prefixes specifically leave one number in each exchange non-assigned: the number consisting of that prefix followed by "1" and that prefix number, so that a number like 867-1867 would be left unavailable. They may or may not still be following this practice, however; it was used at least once in an episode of Adam-12 where the guy read his phone number to the officers, and it used the prefix-1-prefix format.

There is however, one area code that while it does exist, has only one telephone number. The United States Government has a special telephone system operated by the National Communications System or NCS (a part of FEMA, which means it's under the control of the Department of Homeland Security), and the service is called Government Emergency Telecommunications System, or GETS. This uses area code 710. The one and only telephone number in that area code is 1-710-627-4387. This odd number represents what you get from the spelled version of the number: 1-710-NCS-GETS. Note that from most pay phones you can call this number without paying; you get a special dial tone requiring you enter an NCS-authorized account number and then the number to be called. No point bothering with this number unless you legitimately are allowed to call it; presumably the black helicopters could come after you if you called it many times for no good reason.

In Australia, where phone numbers are eight digits rather than seven, (0x)[3] 5550 xxxx and 7010 xxxx are reserved for fictional use.

A modern version of Five Five Five occurs when a computer's IP address is required. Usually, addresses with at least one of the numbers above 255 (such as 359.33.9.234) are used, as these are not legal addresses. Note, however, that using an address that is 10.x.y.z, 172.[16..31].x.y, or 192.168.x.y, 169.254.x.x, or 127.x.x.x is another way to accomplish this, as these IP address spaces are reserved for local area networks and loopback communications, and so no computer on the public Internet could have one of these addresses. However, this technique is rarely used, possibly because anyone who would complain about the use of an invalid IP address would also complain if an "obviously" non-routable address were presented as an address on the Internet. Then again, it's less glaringly obvious than using an IP address that features a number above 255. Oddly enough, the address range 192.0.2.x, which is explicitly set aside for example use, rarely seems to be used; although this might be for the same reason as above, when people may associate '192.x.x.x' instead of the real range of '192.168.x.x' with 'private IP space'.

Example.com, example.net and example.org are reserved for "documentation" by RFC 2606 but make for useful fake email addresses.

Search-wise.net serves as a dummy search engine for shows that want to show a character using a search engine but which (for whatever reason) either don't want to or can't use a real one like Google. For example The BBC doesn't have product placement so Search-wise is used instead.

Aircraft tail registration numbers N88892, N9748C and N9747P are reserved for cinematic use as well. Some of these numbers may have originally belonged to a small private plane which was written off in a non-fatal collision or accident; the tail number of the destroyed plane is retired, only to constantly re-appear on fictional aircraft in cinema or other media.

A secretary who worked for a supplier to the F.W. Woolworth Co. was asked to make up a fake Social Security card for use in wallets that the company sold. She put her own number on the card. So many people started using it (many probably by accident, thinking it was a legitimate number to use) that the Social Security Administration gave her a new number. To this day, there are hundreds of people (some working under the table) who are working under her original number, 078-05-1120. While everyone at the Social Security Administration knows it's no longer a valid number, most people do not. Similarly, a placeholder commonly used in Visa (Chargex) credit card adverts in Canada is the name "G. Raymond", which belonged to a real Visa Desjardins employee and looked the same in both French or English.

Since we have several examples from the 1950s, 1960s and 1970s, this practice clearly predates Tommy Tutone's 1982 hit, "867-5309/Jenny." There was considerable backlash arising from people calling 867-5309 and asking for Jenny in various area codes; as this practice of non-routeable placeholder numbers was already well established by the time the song was released, this song was a significant departure from the norm.

A variant exists for postal addresses; when a real street is used for a character's address, the actual house number usually doesn't exist. This is much less noticeable than a fake telephone number because only a viewer who's very familiar with the city in question will pick up on it.

There are also fictional TV channels (at least in North America): Channel 37 has never been issued to any real-life TV station, since its frequency (608-614 MHz) was given over to radio astronomy in 1963. (In addition, channel 1 was removed in 1948 and channels 70 and up were removed in the 1980s. The removal of 52-69 during the 2009-2011 analog shutdown and removal of everything else above 36 in the 2019-2021 repack were hidden from viewers by a virtual subchannel numbering scheme.)

Retrieved from "https://allthetropes.org/w/index.php?title=555&oldid=1957905"
Categories:
Cookies help us deliver our services. By using our services, you agree to our use of cookies.