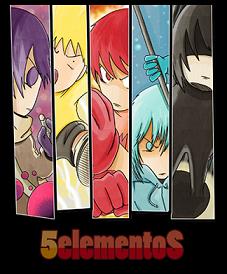 "The world. A finite home, quite big and composed by hundreds of elements. "
—Kaji

5 Elementos (5 Elements) is a Spanish "manga", written by Jesús García Ferrer, set in a fantastic world. This world is ruled by elementals, people with the power to control nature's elements (going from fire to viruses to shit. No, really). After the world's most powerful warriors (called the Five Elements) betray the king of their nation and then disappear, the new king erases all of the nation's historic records, to "create a brand new nation". Many years later, Kaji Llamaviva (the protagonist, a 13 year old kid), along with his friend Zap and some kids that hate him (and Sokar), starts investigating the Five Elements to discover what really happened, and if the official version is actually true, or the government is keeping a masquerade. The mood is mostly comic, but it has moments of tension, suspense and drama. It has won the award to the best manga of spanish author twice. It began in 9/24/2008 and is still ongoing.

As for now it is only in Spanish: [1] But it seems an italian team is translating it to Italian: [2] [dead link]

Tropes used in 5 Elementos include:

Kaji: What about the address? Why don't we go check that out first?
Matarratas: Oh, sure! Let's go to an address written down in a genocide's diary! Then we can drop by the jail to get tortured! Aw, come on! I'm not going there even mad!
(Cut to the poor zone of the city)
Matarratas: I still don't quite get how you convinced me.

Zap: I don't complain 'coz I'm the protagonist.
Matarratas: The heck, protagonist? You're a tree!
Zap: That's why. The play's called "Bifrost and the tree". And I'm the tree.