Everything About Fiction You Never Wanted to Know.
(Redirected from 78violet)
Jump to navigation Jump to search
/wiki/Aly & AJcreator 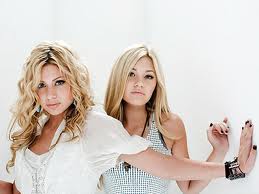 They were born in Torrance, California, but spent part of their childhood in Seattle, Washington. They are both actresses, singer-songwriters, piano players and guitarists. They signed a record deal with the Disney-owned label, Hollywood Records in 2004.

They released their debut studio album Into the Rush on August 17, 2005. The album debuted at number thirty six in the United States, selling over 24,000 copies in its first week and was later certified Platinum by the RIAA. Into The Rush was a socially conscience take on the pre-teen genre of pop/rock.

Their second studio album Insomniatic, which was a Darker and Edgier Surprisingly Improved Sequel debuted at number fifteen in the United States, selling over 39,000 copies in its first week on the Billboard 200; this is their highest debut to date. Their second album's lead single "Potential Breakup Song" is their most successful single to date, it was certified Platinum by the RIAA for sales over 1,000,000 copies. With many rumors going around of the band changing their name, the duo announced that they will be changing their name to 78violet. The duo have also launched a franchise line which includes a doll series and book series.

On February 19, 2010, Aly & AJ announced on their official Facebook page that they were "no longer a part of Hollywood Records" and that the album they recorded for Hollywood Records probably won't be released. However, they are "continuing to write and record new songs".