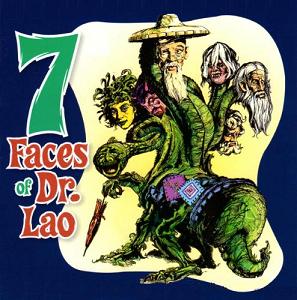 7 Faces of Dr. Lao is a 1964 fantasy film from MGM, based on the 1935 novel The Circus of Doctor Lao by Charles G. Finney, directed by George Pal, and starring Barbara Eden, Arthur O'Connell, John Ericson, Kevin Tate, and Tony Randall in a tour de force performance as the eponymous Chinese showman, the Abominable Snowman, Apollonius of Tyana, the Giant Serpent, Medusa, Merlin the Magician, Pan, and an unmade-up, anonymous, and silent member of his own audience.

To the dying Arizona town of Abalone comes the mysterious Dr. Lao (Randall) to announce in the local newspaper the advent of his wonderful circus. The editor, Ed Cunningham (Jon Ericson) is engaged in a double struggle: to gain the affections of repressed young widow Angela Benedict (Barbara Eden) and to convince the townspeople not to give up and sell out to cynical local magnate Clint Stark (Arthur O'Connell). Nevertheless, he is also intrigued by the mysterious Lao and his circus, which seems at first to consist only of the doctor, his yellow jackass, and a fish in a bowl—but which hours later has mushroomed into an entire carnival of marvelous exhibits.

Over the next three days the citizens of Abalone have life-altering encounters with the denizens of the circus, which culminate in the spectacle of the destruction of the ancient Atlantis-like civilization of Woldercan, due to its strangely familiar citizens' giving in to the blandishments of a mysterious tempter who strongly resembles Stark. Meanwhile, Stark's thuggish mooks drunkenly attempt to destroy Lao's circus, inadvertently releasing his pet fish/Loch Ness monster, which chases them out of town and is recaptured only with difficulty by Lao and Angela's young son, Mike (Kevin Tate).

The townspeople, shaken by what Lao has shown them, vote not to sell out to Stark—who thanks them for restoring his faith in humanity, and reveals that a new railroad will soon come through, bringing prosperity back to Abalone. With Stark and the town redeemed, and Ed and Angela now safely a couple, Lao's work is done, and he vanishes, only his voice remaining to remind Mike that life itself is the truly wonderful thing.

The film greatly altered the plot and softened the mordant tone of the original novel, opting rather for a sense of whimsy and wonder, reflected in the score by Leigh Harline, best known for scoring Disney's Snow White and The Seven Dwarfs and Pinocchio. Unfortunately, despite an extraordinary performance by Randall and some (though not all) of the other cast (Kevin Tate as Mike is a stand-out), and the admirable visual effects—for which SFX artist Jim Danforth received an Academy Award nomination and makeup artist William Tuttle an Honorary Oscar—the film has something of the feel of a made-for-TV movie, exacerbated by the use of stock footage from Atlantis, the Lost Continent and The Time Machine, with unconvincing interspersed shots of the cast in ancient costume. It did not do well when it came out, but as the years have gone by, it has come into its own, and is now widely regarded as a fantasy classic.

Tropes used in 7 Faces of Dr. Lao include:

Dr. Lao: Mike, the whole world is a circus if you look at it the right way. Every time you pick up a handful of dust, and see not the dust, but a mystery, a marvel, there in your hand, every time you stop and think, "I'm alive, and being alive is fantastic!" Every time such a thing happens, Mike, you are part of the Circus of Dr. Lao.