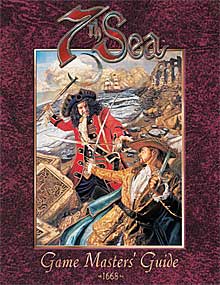 The Guy in gold is DEAD

7th Sea was a tabletop role-playing game and related CCG created by AEG after Legend of the Five Rings became a success. The game's setting is Theah, an alternate version of Europe during the 17th century. Theah was composed of several theme park versions of various major European countries and cultures. The countries vied with each other for political and economic dominance, while pirates sailed the seas in search of adventure and treasure. The world is based very much upon the varied tropes common to swashbuckling and pirate stories.

The tabletop RPG features a system similar to Legend of the Five Rings in mechanics, but distinct in that the PC's are almost explicitly given a mild form of Contractual Immortality. PC's can only be killed off if the GM is specifically setting up such a possibility through the plot's villain, or if the characters fall victim to the Chunky Salsa Rule. Players are encouraged to come up with utterly outrageous plans of action and are given rewards both for implementing these ideas and for impressive role playing using the Rule of Cool as a guide. The RPG setting enjoyed being quite over the top when encouraging ideas for characters and stories. Like Legend of the Five Rings, the rules were later adapted for Dungeons & Dragons 3rd Edition under the name Swashbuckling Adventures.

The CCG had the players choosing a faction which represented a pirate crew or a country's naval power, pitting two ships against one another in combat. Players would attempt to hire crew, chase down their opponent's ship, and then attack with ether cannon or boarding based attacks.

Like the Legend of the Five Rings, the Metaplot was supposed to be steered by players' choices in the CCG tournaments and in RPG supplements distributed through the quarterly newsletter sent to game masters who had paid a registration fee to AEG.

The main story arc of 7th Sea only spans about a year and a half of time, unlike its cousin, Legend of the Five Rings which has gone through several lifetimes worth of game plot. The major storyline elements were quite varied, with every country and major faction of the world having a part in the story.

The CCG and then the tabletop RPG were discontinued with little fanfare, though the CCG had a final expansion set published online free for download and printing while the RPG managed to get a final supplement which included a timeline for the major plot arcs which were never resolved in the metaplot.

In the RPG, the various splats were the country of origin a character hailed from. In addition to this, a character could join one of a number of secret societies whose origins, goals, and knowledge were made available in additional RPG supplement books.

The RPG is also very notable for its No Celebrities Were Harmed versions of quite a number of NPC's described in the sourcebooks. People with only a cursory knowledge of European history can name at least two or three of the major NPCs' real-life counterparts. Those who have more background in history can find many more, as well as note the places where Wolfrond von Hazel was a Syrneth Spy.

Tropes used in 7th Sea include:

The countries in 7th Sea provide examples of

Note: Since the secret societies of 7th Sea are secret a great many of these examples are hidden with spoiler text. Those that aren't are generally common knowledge.

The secret societies of 7th Sea provide examples of

The Knights of the Rose and Cross

No Banter, No Barter, No Quarter.

Retrieved from "https://allthetropes.org/w/index.php?title=7th_Sea&oldid=1911686"
Categories:
Cookies help us deliver our services. By using our services, you agree to our use of cookies.