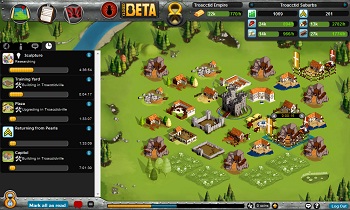 8Realms is a browser-based MMORTS empire-building game developed by Jagex. Players compete to advance their empire through history, starting in ancient times and progressing through the Classical, Feudal, Renaissance, Imperial, Industrial, Modern, and Future Ages, via military conquest, research, and trade. Players compete to advance through the ages the fastest; the winner is the first player on a server to complete the final chapter.

Tropes used in 8Realms include:
Retrieved from "https://allthetropes.org/w/index.php?title=8Realms&oldid=1733663"
Categories: