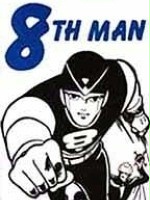 Based the manga series 8 Man by Jiro Kuwata and Kazumasa Hirai, this 1963 anime tells the story of a private investigator named Hachiro Azuma (Brady in the US), ambushed by criminals and run over by a car. As he lies dying, a mysterious scientist rescues him and gives him a new cyborg body.

Now empowered beyond ordinary men, Azuma becomes (all by himself) the secret 8th division of the Tokyo Police. His only superior is bureau chief Tanaka (called Chief Fumblethumbs, of all things, in English). Now called 8-Man ("Eighth Man", in English, because according to the dub he was the eighth cyborg attempt -- and the first one to work!), he has the usual array of powers: Super Strength, Super Speed, plus the unusual ability to detach and remotely control his limbs. In a detail that would never get past kid-vid censors today, 8-Man recharged his power supply using "special cigarettes". He spent much of his time fighting an array of goofy enemies ranging from communist spies and robot bats to gangsters with bizarre names right out of Dick Tracy.

Although the animation was average for a TV series of its time (it ran from November 7, 1963 to December 12, 1964 in Japan), by modern standards it is laughable and crude. In addition to being in black and white, its production crew had almost no experience with cel animation and took several episodes to gain any skill with the form. Even then it was of low quality, with a minimal frame rate, low detail, and wooden movement.

Despite this, it is still viewed with a certain amount of nostalgia in both Japan and the United States, so much so that there was actually a (reputedly awful) Live Action Adaptation produced in 1992.

It also prompted a Darker and Edgier Revival OVA series in 1993, 8th Man After, which was released in English by Streamline Pictures. This has joined its originator as a Cult Classic due to its unique blend of dark Cyberpunk and over-the-top Superhero themes. It is also remembered for its mock-worthy Drugs Are Bad themes - Cybernetics Eat Your Soul because they are unusable without Psycho Serum. Eight Man is resurrected to fight them, fueled by Super Serum. Just Say NO to Psycho Serum - Use Super Serum! This could have all been avoided by simply distributing the "safe" serum. Then lots of people could have cybernetics. But Reed Richards Is Useless. It's just an anime, I should really just relax and enjoy the ultraviolence.

Along with Astro Boy, Gigantor and Speed Racer, 8 Man is historically significant as one of the first anime series to be distributed in the United States. The American version's newly animated opening sequence was the first professional animation work done by Ralph Bakshi.

Any similarities to another story about a dying cop revived by Science are purely coincidental.

Tropes used in 8 Man include:
Retrieved from "https://allthetropes.org/w/index.php?title=8_Man&oldid=1674194"
Categories: