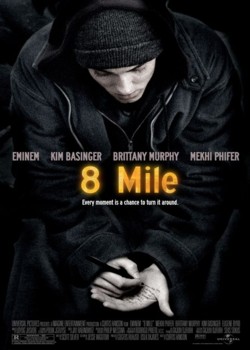 It's a semi-autobiographical account of Eminem's early years in Detroit, struggling to make ends meet and get his career off the ground. As such, the film is set in the underground Detroit hip hop scene in 1995. The film depicts white rapper Jimmy "B-Rabbit" Smith Jr. (based upon a younger Eminem) as he struggles for respect among his black peers.

The film was a hit in the box office, actually well liked by fans AND critics. Not to mention it also won an Academy Award for the Best Original Song: Eminem's "Lose Yourself", becoming the first film with a rap/hip-hop song to win an Academy Award.

Tropes used in 8 Mile include:

Jimmy: Paul may be gay, but you're the faggot.

Jimmy I'm a piece of fucking white trash. I say it proudly. Here, tell these people something they don't know about me.