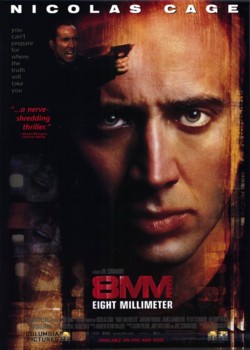 Private Detective Tom Welles (Nicolas Cage) is hired by wealthy widow Mrs. Christian, who has discovered a reel of 8mm film in her late husband's safe that depicts what appears to be the brutal murder of a teenage girl by a hulking man in a mask. Mrs. Christian wants Welles to find out whether the incident in the film is real.

A direct-to-video "sequel" called 8mm 2. It has no connection whatsoever to the original.

Tropes used in 8mm include: