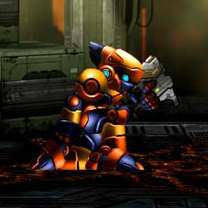 There is going to be a lot of scrap metal when he's done.

A.R.E.S. is a series of episodic games (with only the first episode currently released, Extinction Agenda) developed by indie developer Extend Studio. The first episode is available on PC (the Steam has two exclusive suits), with the XBLA version coming eventually.

The plot of Extinction Agenda is as follows: In the late 21st century, humanity has contaminated the Earth to such a dire state that an organisation of scientists, United Earth (UE) had formed in an effort to save it. Governments from around the world collectively contributed trillions to UE, funding its expensive and highly experimental research. They managed to hit success, with Dr. Julia Carson's innovative concept, known as Deep Space Reprocessing (DSR), which allowed humans to recycle waste into organic materials through abiogenesis, a process that would essentially recycle the planet and transform it into a more habitable state. It turns out to be a success, Earth's state is improving, and things are beginning to look up for humanity.

Then disaster strikes. The only DSR space station, Junk Sector, is hit by an unidentified crystalline object, which emits a mysterious green gas, and all contact with the crew is lost. Dr. Carson herself leads a team onto the station to investigate, and discover that the robots on board are being controlled by the gas. Their first actions are to 1) head to the armory, and 2) send samples of the gas back to HQ. Using the samples, UE manages to figure out how to make robots immune to the gas, now called "zytron". The answer was to create a zytron-immune robot more technically advanced than any robot UE had ever created. The robot would need to excel at combat and have a name akin to its strength and brutal efficiency – Ares.

The first episode, at least, is a side-scrolling shooter. Ares has a array of weaponry to use, as well as two types of grenades. He also has backup from Valkyl, a military-support satellite, who can rain down laser death once her bar is full. The game uses a 'combo' system with a maximum of 99 hits, and each stage you complete has a letter rank, the maximum rank in Normal mode being A, and Hard mode has SS as its maximum, these ranks are determined by factors such as how fast you complete the stage, your highest combo, how much damage you take during boss fights, and how much material you collect. Speaking of which, collecting materials from destroyed enemies allows you to upgrade your weapons and grenades, create more grenades and health packs.

Though the first episode is a fairly short game, its replayability comes from the hidden secrets, achievements, and getting higher ranks. If you're a fan of side-scrolling shooters, give it a try.