Everything About Fiction You Never Wanted to Know.
Jump to navigation Jump to search
/wiki/A. A. Milnecreator 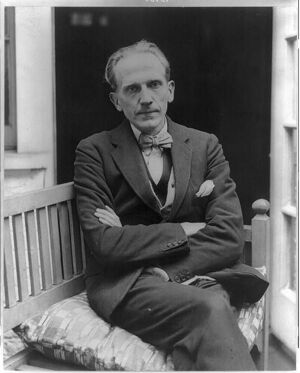 A. A. (Alan Alexander) Milne (1882 - 1956), English writer of wide-ranging variety, now remembered almost entirely for four books of children's stories and poems, many featuring the character Winnie the Pooh. The process had already begun within his lifetime, to his considerable annoyance.

He first came to fame as a humorist, and was a contributor to Punch (as was the cartoonist E. H. Shepard, who went on to illustrate his Pooh books). He also achieved considerable success as a playwright, and wrote several successful novels. The detective novel The Red House Mystery was quite successful in its day, though now is mainly remembered for having been held up by Raymond Chandler, along with Murder on the Orient Express, as an exemplar of ludicrous whodunnit plotting. Two of his short stories were adapted for Alfred Hitchcock Presents.

Works by A. A. Milne with their own trope page include:
A. A. Milne provides examples of the following tropes:
Retrieved from "https://allthetropes.org/w/index.php?title=A._A._Milne&oldid=1574463"
Categories:
Cookies help us deliver our services. By using our services, you agree to our use of cookies.