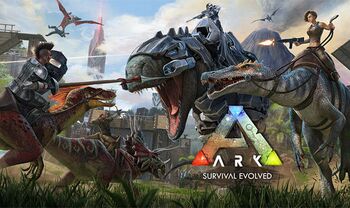 ARK: Survival Evolved is an Action Adventure survival video game developed and published by Studio Wildcard. It was fully released on August 29, 2017 for Linux, Microsoft Windows, OS X, PlayStation 4 and Xbox One; the game's early access began for Windows on June 2, 2015, for OS X and Linux on July 1, 2015, and for Xbox One on December 16, 2015. In the game, players must survive in a world filled with roaming dinosaurs, natural hazards, and potentially hostile human players.

The game is played from either a third-person or first-person view and its world is navigated on foot or by riding a dinosaur. Players use firearms and Improvised Weapons to defend against hostile humans and creatures, with the ability to build bases as defense. Players can also customize weapons using items scavenged from the environment. The game has both single-player and multiplayer options, with the latter allowing players to engage in simultaneous gameplay.

Development began in October 2014. The development team conducted research into the physical appearance of the dinosaurs, though they took creative license for gameplay purposes.