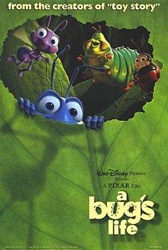 A Bug's Life is the second computer-animated film from Pixar. It's something of a twist on the fable "The Grasshopper and the Ant" meeting The Seven Samurai with a bit of Three Amigos thrown in for good measure.

The movie begins in a peaceful ant colony, which yearly is terrorized by a biker gang-esque group of grasshoppers (led by the intimidating Hopper), and the ants are forced to give them an offering of food. One year, an ant named Flik (considered a nuisance by the rest of the colony due to his inventions, which often cause more trouble than they're supposed to) accidentally knocks the offering into the nearby creek. Hopper forces the ants to re-gather double the usual amount of food, giving them until the end of autumn (or "when the last leaf falls"). The ants are worried, particularly because they won't have enough food for themselves over the winter if they gather enough for the grasshoppers, so Flik volunteers to redeem himself by recruiting "tough bugs" to fight Hopper and his gang. Seeing an opportunity to get Flik out of the way so he doesn't mess anything else up, the colony's ruler-to-be, Princess Atta, lets him go on his quest.

Flik travels to "the city" (a bug city underneath a trailer), where he meets a bunch of recently-fired circus bugs. After seeing them perform one of their acts, Flik mistakes them for warriors, and takes them back to the colony. The circus bugs are initially shocked when they find out why they're there, but eventually begin to love living in the colony, and agree to help Flik come up with a plan to defeat the grasshoppers.

A Bug's Life, like most Pixar films, was a critical and financial success, and, with its Hilarious Outtakes, also started the Credits Gag tradition in Pixar movies. It did not, however, receive the universal acclaim of Toy Story. Its Rotten Tomatoes grade is the third-lowest of any of their films, at a rating of 91% (only Cars and Cars 2 have lower grades). Due to this, it is not as widely remembered as their other films and is considered their most underrated.

Tropes used in A Bug's Life include: